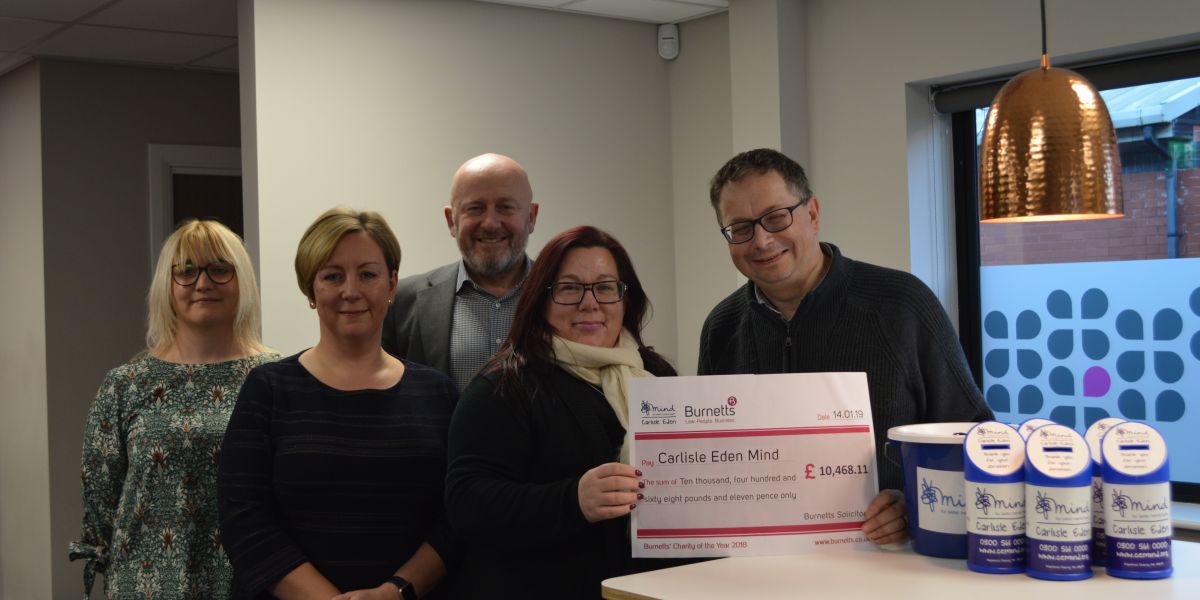 As part of its Charity of the Year initiative, Burnetts has donated £10,468 to Carlisle Eden Mind, helping to cover the cost of more than 800 calls to the charity’s Mindline service and to train almost 20 new volunteers in call handling and face to face support.

Each year partners and staff vote to choose a charity on which to focus their fundraising efforts. During 2018, Burnetts’ teams have walked the Ullswater Way; organised a mental health conference with Cumbria CIPD and Acas; and hosted a corporate golf day, as well as selling snacks, baking cakes, dressing down and holding raffles, all with the aim of raising at least £10,000 for Carlisle Eden Mind.

One of the major contributors to the total raised was a Charity Golf day, organised in conjunction with Rachael Bell Wealth Management, which raised £2,900. In addition, when the firm relocated its Carlisle office in June, £2,000 worth of furniture was donated to Carlisle Eden Mind, helping to furnish the Lighthouse which provides sanctuary to those in crisis. Staff and partners across Burnetts’ four offices have also munched through £1,000 worth of snacks, the proceeds of which were donated to the Charity of the Year.

The charity partnership came to close at a cheque presentation which was held at Burnetts’ Carlisle office on 14 January 2019 during the last of the firm’s fundraisers, a Donation Day in aid of Carlisle Eden Mind’s charity shops.

Burnetts’ Managing Partner Nick Gutteridge said, “Carlisle Eden Mind is the third good cause we have worked with through our Charity of the Year project. The scheme has motivated us to raise almost £35,000 for our chosen charities, but we have also gained a great deal from the charities. Partnering with Carlisle Eden Mind has given us the opportunity to be open about mental health in our own business and to improve how we look after each other. The mental well-being of our people will continue to be a focus for us and I thank Carlisle Eden Mind for its role in helping us achieve that.”

Mental health is something that affects us all: a quarter of us will experience a mental health problem within any given year and many people will have thoughts of self-harm and suicide. Carlisle Eden Mind provides a range of support including: Mindline Cumbria; The Lighthouse; independent advocacy including for children and young people; and training on mental health issues. Anyone who is in crisis, feeling desperate, or feeling suicidal can access free information and resources at http://www.cemind.org/get-help-now.aspx .

The firm’s 2019/20 charity partnership will be announced shortly. For updates and further information, visit http://www.burnetts.co.uk.